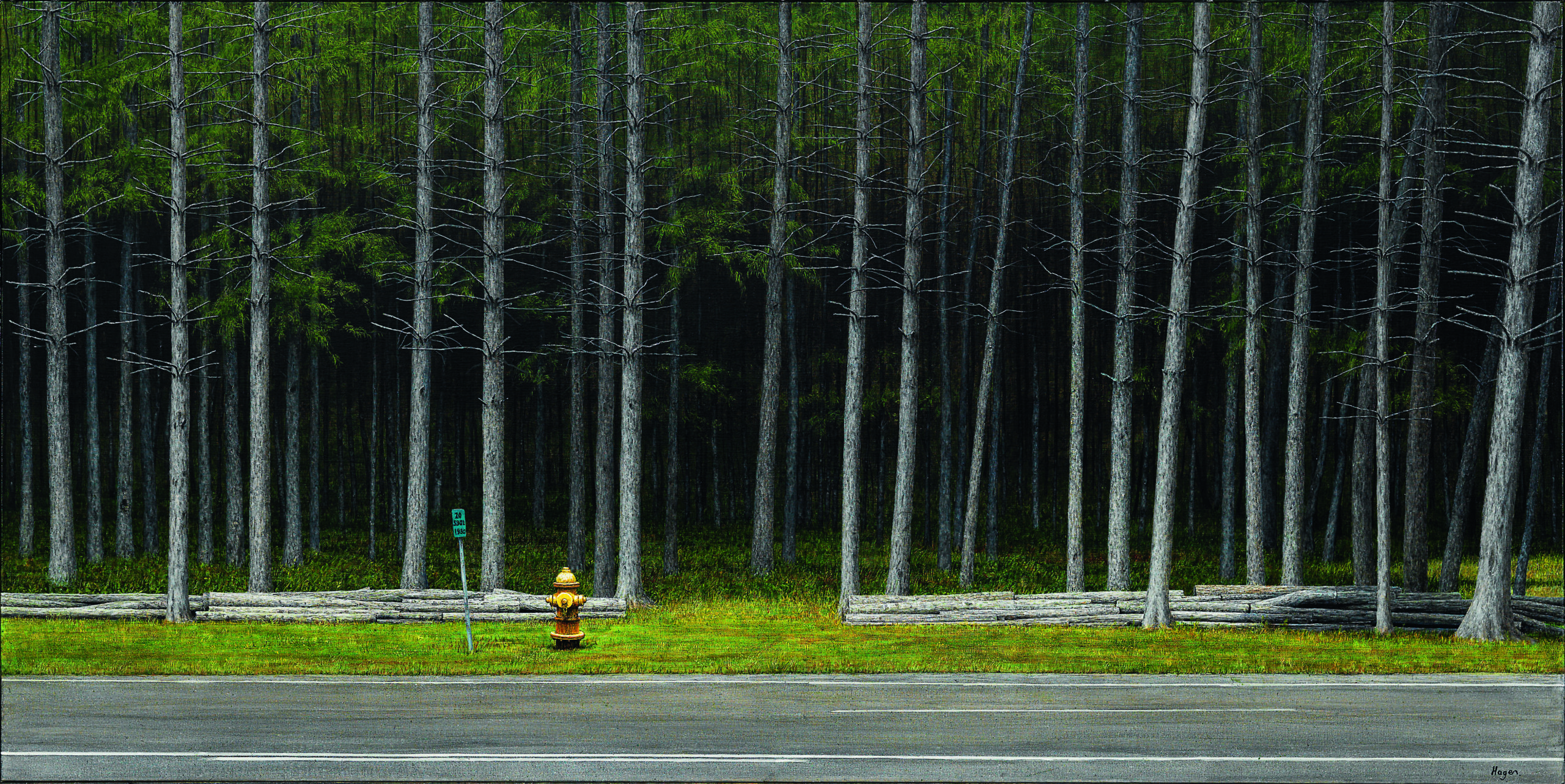 Well…. we can, for instance, admire the techniques used to produce a Neo-Realist painting, and, as careful observers, we naturally show no mercy if the craftsmanship exhibited by the work – its precision, accuracy, colour composition, texture – is found to be lacking in any way. If these elements are as they should be, however, the seduction and the journey into the painting can begin.

Technically okay, it said. Right, but that can mean more than one thing. It is not enough to be able to depict objects end places in the world just the way they look in real life. The painter must also understand the inner nature and material qualities of these things, and be able to express them. Heaviness, lightness, hardness and softness, for example. A depiction of a road in Califonia is not interesting unless it conveys a sense of the taste and smell and sound of the place, and the surroundings must be convincing.

The greatest quality in Søren Hagen´s works, however, is his ability to create an atmosphere, and to describe what it is to be human. Human beings are indeed conspicuously absent from his paintings. But there are traces of them. The roads, the signs, the railway tracks, the gas tanks, the mills, the water towers, the warehouses, the sheds, the car parks, the bridges, the viaducts, the streches of beach, discarded barrels and abandond machinery, gratings and barriers. Closed or enclosed objects appear strikingly often in these works. Various types of containers appear frequently, and the train carriages are closed and intended for the transport of freight, the nature of which one can only guess at. A sign saying “DO NOT ENTER” stands beside a ramp leading downwards into a subterranean garage, next to a building with windows that have been replaced by brick wall. A lifeguard´s watchtower stands on a deserted beach. It is closed. As in Twin Peaks, secrets appear in Hagen´s works with a disquieting degree of intensity.

Perhaps “secrets” is the wrong word. Yet in spite of all the open views featured in Hagen´s painting, the works also depict a telling number of closed containers and buildings. Perhaps these are connected in some way to the closed drawers and locked rooms that we all have inside us. Loneliness and isolation are tangible in these paintings. Melancholy rises insistently in them. It can almost be said to be their hallmark.

Otherwise, these roads out in vast expanses of California and Arizona look so promising. the sky is blue, almost a Hockney blue. The clouds are light as feathers, and the day is young and could be a good one – yet it is the blue colour of the sky that sends an almost surrealistic or Magrittean signal warning that not is as it shouid be. These are not ornamental pieces, even if on first impression they would seem to be so, approachable as they are. They are serious works. They convey convey a sense our irremediable loneliness. The world appeares open to us, yet it says “STOP” along the way, and there are “ONE WAY” signs along Route 66 ….