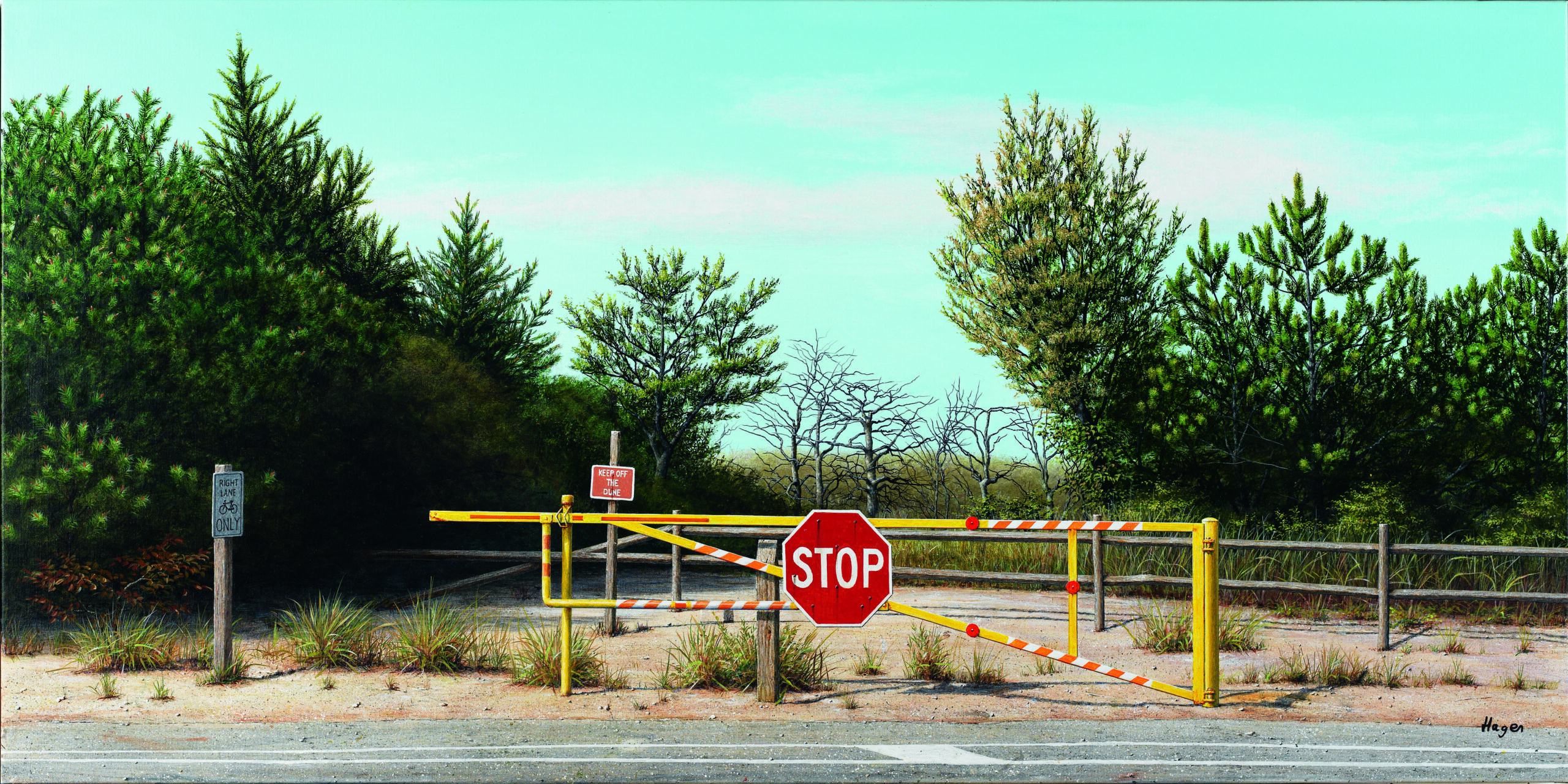 Man is absent from Søren Hagen’s new pictures. Yet again. And yet man is still present. He has left his trace. The signs of highways and byways. Jetties, sheds and car parks quietly caressed by the Sun as they meet Nature’s palm groves or her hillside shrubs. The sky, a representative of power and symbolising a perspective that reaches far beyond the individual, sparkles blue, at times navigated by the lightest of clouds. Yet in their bright enclosure, these majestic clouds are merely another contribution to the distinct tone of tranquillity in these perfect and, in the positive sense of the word, smooth pictures. ‘Tystnaden’ is the name of one of Bergman’s films from the mid-1960’s about the terrible realisation that God is dead. Heaven above us is empty. I am not here to profess any insight into the personal beliefs and religious considerations of the artist, but his pictures clearly depict a world, where God may play a part, but is not present.

An existence without God makes an empty life. The World and its entire potential may lie open, right in front of us, or so it appears from the constant reference in Søren Hagen’s pictures to infrastructure and mobile networks. But the price is the isolation and the loneliness. Søren Hagen’s paintings are not merely pictures of lonely people amongst ‘people’, as we have seen, they are not even there. Loneliness is a basic condition, and with pictures that also reject any absolute interpretation, the artist reveals this with all due ambiguity.

Earlier works have suggested a broad range of ‘secrets’ in the form of closed containers and buildings. It seems to be a general motivic trait in many of the painters classified as neorealist. Critics of the neorealist trend frequently point out that you only see what you see. It could be a person or a landscape. But the seductive quality of the actual technical craftsmanship apart, neorealist pictures tend to consist of several layers of meaning. Underneath the surface lie those narratives that help us invent the story and those characteristics of the portrayed that make us ponder over his or her inner life.

Søren Hagen’s latest paintings have the same characteristics. Do all of these roads lead anywhere? What happened in this place? On the bathing jetty, in the car park, in the little shed? Why have some of the roads been cordoned off? Why is this place so quiet? I see it not merely in the sense that, prior to the moment captured by the artist as having lasted an eternity, an accident could have happened or a crime could have taken place, the pictures hold this disturbing element of uncertainty and suspense. These are merely the methods of an experienced artist. The reproduction of reality in these pictures, at the same time alarming and recognizable, becomes an invitation to the viewer to ‘walk’ these American landscapes and draw from them their secrets. I rather see the pictures as holding ambiguous life interpretations for us to deal with and relate to, like it is the case with any good and meaningful pictorial art.

This is what art does. Apart from the pleasure of colours and lines and light and space, and as well as an admiration for the craftsmanship involved, art imparts feelings – in this case a constructive melancholic feeling – and brings us to think about life and our relationship with our neighbour. Who, characteristically in Søren Hagen’s new pictures, is remarkably absent…

Torben Weirup is an art critic for the Danish national newspaper, Berlingske Tidende.